A 5 day week with a broken arm

I've never had a broken bone. This counts as its broken, but it's not broken in a way that needs a cast. My immobility is from messed up soft tissue around my elbow and hip. The hip thing is fine, I just get up funny and walk funny until it loosens up.

The arm is difficult. I can get it to about 20 degrees before straight and say 20 degrees before right angle. So reaching shoelaces is hard, and I can't touch my face. Here's some observations on a week reduced mobility.

Putting on socks is new to do left hand only. Belts are a several minute process. Toothbrushing is awkward with the left, it's quite unrefined, although by Wednesday when I looked down at my hands at work, the right felt leftish and the left felt rightish. I think the left was starting to come alive more. Eating yogurt is easy as it sticks to the spoon, soup is harder. Chopsticks were on the easier end for the fingers, but the angle the wrist wants to approach the plate at is all wrong. Rotations at the hand are very limited, and torque against rotation is impossible (ie jar opening).

The painkillers say don't operate heavy machinery, which is good advice. Its codeine based. They insert a layer of dumb. I'd listen to someone and take notes (typing). I'd read the note and it didn't even remotely match what they said, even though what they said never left my mind. I got a bill from a waitress, thought it looked fine, ie it added up to what I thought the items would add up to. I paid cash. She said I gave her too much. The bills I counted didn't really match at all, even though I had the price in mind and was counting towards it.  I took no more after Wednesday. Thursday I felt fine, felt more connected to the pain of the arm and what it was telling me.  It's not bad, but it's useful information instead of numbly reaching for things and having sharper pain only kick in later.  I guess that counts as stoping them before enough dependency kicked in that I was living in a box in tattered clothes trying to score morphine hits instead of the low level painkiller stuff and talking about the life I once had... just 3 days worth.

So with a Sunday injury, 1 day of pain/diagnosis a day later, I did 3 days of painkiller and tentative movement.  It's now two days without.  Friday, or kind of 5.5 days in, I felt optimistic on some movement (the lethargy or "apathy" as wiki lists a side effect seems to be gone).  On the way past our gym to the bathroom today, I picked up 2 5lb weights and played around with them.  That morphed into 15 minutes of fiddling.  A joint is meant to move, warming it up and using it within limited range felt really good.  I've rarely seen any injuries get better (or get better faster/optimally) with pure rest.  Bodies move, metabolisms that are not tepid work better in my opinion on any affliction I've ever had.  My hip is surprisingly sore, I think I'm going to move to a week of gentle motion to actually pump blood through there in better fashion as it still feels like just a giant lump of tense tissue.  We'll see what routine I can make with the 5lb weights.  Lots of movements, rotations, etc. actually felt pretty good.

I'm in forced downtime, I accept that's necessary and it's not at too bad of a time of year.  I rarely do this little, it's been nothing but sleep and walk to work.
Posted by BikingBakke at 15:58 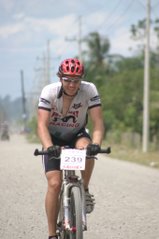